In July 2022, association Art Cesis organized the annual professional painters' summer school and painting workshop for the twelfth year in a row, this time celebrating the 150th anniversary of the outstanding Latvian landscapist Vilhelms Purvītis. Participating artists: Ritums Ivanovs, Reinis Liepa, Janis Dukāts, Jānis Blanks, Ansis Rozentāls, Mārtiņš Zutis, Zile Ziemele, Laima Bikše, Signe Vanadziņa, restauration master Dmitrij Laschetko. ArtCēsis is led by Mrs. Inese Ciekure.
The aim of the summer school was to learn and understand casein painting technique, mixing it with hommage to painter Purvītis who is considered to be an absolute classic of Latvian art. To analyse, how deeply Purvītis' characteristic landscape motif is rooted and strengthened in the nation's consciousness, and whether it is still relevant today. The task of the workshop was to explore the identity of Latvian visual art in the context of heritage left by Purvītis and to create new works. The newly made paintings are exhibited until August 31 at the painters' workshop, Raunas iela 13, Cēsis, Latvia.

The founder and most ambitious moderniser of national landscape painting, Vilhelms Purvītis (1872–1945) is recognised as one of the key figures in Latvian visual art of the first half of the 20th century.  In Latvian art history and public perception, the name of this European Latvian classic has become one of the symbols of national identity. As poetic archetypes, “Purvītis-style” images, motifs and moods retain their presence in our sense and understanding of the landscapes that surround us. The painter’s vision of his native northern nature, as well as his classically composed ideal Latvian landscapes in changing seasons, are considered to be the canon of national landscape.


“The deepest essence of a work of art cannot be grasped and exhausted. (...) The works of the great masters are eternally beautiful and indestructible through the fact that they have been created with immense power of the spirit. (...) Eternally unfathomable beauty issues from a true work of art.” (Vilhelms Purvītis) 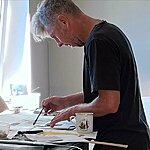 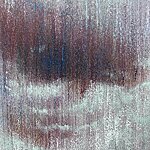 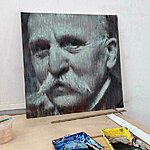